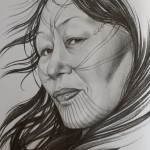 Nuliajuq, “the woman who refused to marry”

The Hidden is an all at once captivating and startling collection of the strange beings that inhabitat Inuit legend and culture. The often ferocious beasts are not without cause; rather they are held within tales told to children to instill lessons, and tales remembered throughout life to remind of the way to treat others, to be kind and gentle, and to remind of the punishments felt by those who lose sight and risk being lost in self-fulfillment.

The book is thoroughly and thoughtfully written by Neil Christopher, who calls Nunavut home. Joined by Mike Austin, a world-renowned tattoo artist and illustrator, the pair gracefully capture the Inuits’ oral legends and folklore with descriptions and artwork so as to trasnport the reader into the Arctic – For much of the year the Arctic seas are bound by shifting ice. But in those cold and dark waters live  many fantastic beings and strange races. And when the seasons change, allowing the moon’s pull and the winds to break the icy holdon the ocean, these beings are free to come to the surface..

The illustrations that accompany each being in this almost encyclopaedic work are imaginative yet true, in the sense that Austin captures the emotion that each being projects and inflicts. They strike the reader in a most memorable way: a grizzly bear thick with twisting muscle drags carries away a human as if it is meat, a person’s leg slung over its shoulder gripped by the long razor-sharp claws of the beast. Other beings are depicted in a more imaginative style, bringing to life those that haunt dreams and inhabit nightmares, occasionally brutal without reason. Always a shock are the motherly creatures, whose roles are not always as helpful or forgiving as one may imagine. And others are depicted in a charming way, indicating no harm in some of the half-fish humanoids which inhabit the oceans.

Mangittatuarjuk, “the ogress of the gravel bank”

The Hidden is a great start for anyone looking to gain insight  into the world of the Inuit. Interjected with quotations from Elders and storytellers, it is hard to put down and will remain in the memory for a lifetime.

The book can be found for sale on Amazon.ca and and Chapters.Indigo.ca .